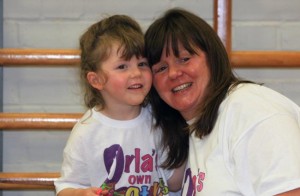 People in a south Bucks village are coming together to raise money for a child with a form of cerebral palsy.

Orla Brash, aged four-and-a-half, from Penn and Tylers Green, was born five weeks premature and, after a complicated birth, had to be resuscitated. She spent 24 hours on ventilators and eight days in the neonatal ward according to mum Sue.

She said: “Waiting for her to take her first breath felt like a lifetime. It was the worst 15 minutes of our life.”

As a result, she developed diplegic cerebral palsy (CP), a form of cerebral palsy which causes tense muscles and spasms, particularly in the leg where muscles can get extremely tight and, over time, causes joints to stiffen, reducing movement.