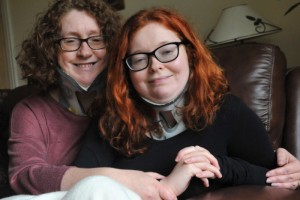 A mum has made a heartfelt plea for help to raise £94,000 to send her teenage daughter overseas for life changing surgery. It is no ordinary appeal that Janine Gray, 48, has issued on behalf of 18-year-old Ellie, who suffers from Ehlers-Danlos Syndrome (EDS).

For Janine, of Victoria Terrace, East Boldon, has the same debilitating condition – and needs surgery herself. In a supreme act of parental love, she and husband Neil, 50, have prioritised Ellie for the major operation, which they hope will go ahead in Barcelona later this month.

It will see neurosurgeons fuse her skull to her spine – and operate on the base and possibly middle of her back – to stabilise her head and neck, alleviating her symptoms. With only around £28,000 so far pledged as part of the Ellie’s Fusion campaign, time is running out to raise the remainder. Janine, whose condition forced her to give up work as a rheumatologist, said: “We have travelled this awful journey together for six years. “Unfortunately, the outlook is pretty horrible for Ellie if we can’t do something about this.”