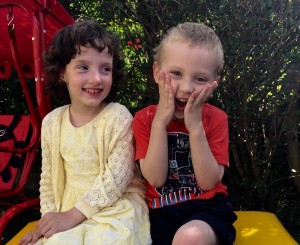 Two children have undergone life-changing surgery which has taken them closer to achieving their dream of being able to walk.

Little Nicole Vendettuoli and Ryan Weatherall were both born prematurely and diagnosed with spastic diplegia, a type of cerebral palsy.

The painful condition, characterised by tightness in the legs, makes walking difficult and other everyday tasks – such as climbing stairs – impossible.

But following fundraising campaigns, the four-year-olds have both been through successful six-hour operations at Leeds Children’s Hospital.

Now they are having weekly, intensive physiotherapy and hydrotherapy to strengthen their muscles – and the outlook is positive.

Nicole, from Oakworth, and Ryan – of Riddlesden – are both looking forward to starting school next month with new movement in their legs.

This week their delighted parents paid tribute to neurosurgeon John Goodden and his team which carried out the surgery, known as Selective Dorsal Rhizotomy (SDR).

And they thanked all those who helped them raise the combined total of £70,000 needed for the procedure, which isn’t funded by the NHS.

Ryan’s dad, Gordon, said: “We’re delighted with the results of Ryan’s surgery and can already see a big improvement.

“He’s doing things that we’ve never seen before, such as sitting cross-legged and standing straight without squeezing his knees together for balance.

“He is falling less and is working really hard during physio.

“Ryan has a long way to go before he’s able to keep up with his friends, but he’s a determined little boy and we know he’ll do it.

“We’re grateful to Mr Goodden and the team at Leeds Children’s Hospital for giving Ryan this life-changing opportunity and to everyone who’s helped Ryan get to where he is today by fundraising, supporting our events and making donations.”