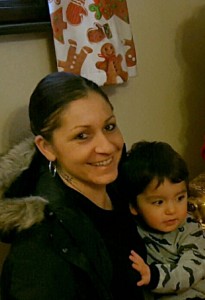 Leighton Singleton was born three weeks prematurely, and was rushed straight into intensive care as he was in respiratory distress.

Medics picked up on a heart murmur, and scans later showed he had two congenital heart defects which will need open heart surgery next year.

Mum Zoe said he does not let this stop him enjoying life, however.

She said: “He always has a smile on his face.

“He loves swimming and he has two lessons a week. He is also a typical boy and loves climbing.

“He doesn’t let anything stop him. But he goes to nursery and gets so tired and he is usually asleep before lunch.”

Doctors also suspect two-year-old Leighton has Ehlers-Danlos syndrome, a rare condition which can affect the connective tissue, including joints and skin.

Zoe, said: “Leighton is very flexible and his fingers bend quite far back.

“It has not been formally diagnosed because he is young, and kids are generally flexible, but everyone who comes into contact with him is aware of it because it could mean he can scar badly.”

Single parent Zoe contacted the charity Just 4 Children which helps youngsters with illnesses and disabilities receive therapies and short breaks which would not otherwise be available to them.